Why change is so difficult 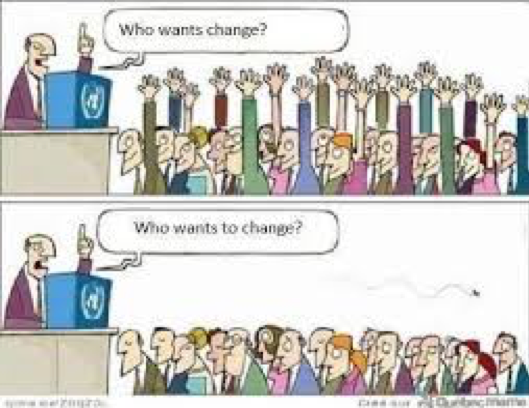 Someone posted this cartoon on Linkedin and I liked it and shared it. I’ve never had so many likes on Linkedin. Apparently that topic, the discrepancy between change and changing yourself, rings a bell. Reason to write a brief a display of my insight and experience in the supervision of individual change.

To begin with, I believe it is of considerable interest to separate individual change and system change (examples of system change include organizational and legislative change in the social field). This has to do strongly with one of the primary contributors to the success of change: motive. People do succeed to change, to break patterns when there is an (individual) felt need to do things another way. For external or collective motives the process of change runs very differently.

With that I have already mentioned is the first of four reasons that cause us to find change so difficult: motivation. It may sound awful but there is actually only one driving force to really get someone to move: fear. Fear and all variants such as discomfort, anxiety, frustration, irritation, jealousy, possessiveness, etc. are the drives who put us in motion. If and only if someone is anxious it is likely that he will take an initiative to change. Hence in (my) coaching a lot of attention and time is devoted to people getting in touch with that fear. Looking from a change perspective there indeed is nothing worse than a satisfied man. Someone who is on average fairly satisfied with a situation will not be inclined to change anything.

The second factor that makes change so difficult is our neurology. We are neurologically hard wired against change. Our brain ‘protects’ itself against any unnecessary loss of energy or imbalance. Because even the slightest brain malfunction or brain damage, has great implications. One of the working components of this protection system is energy conservation. Processes that use extra (brain) energy are ‘discouraged’ by the system itself. Change means creating new synaptic connections; that will cost brain energy. Therefore, the brains themselves will inhibit this process.

The third factor is closely related to the second factor. To exhibit new behavior (and that is one of the basic characteristics of change) not only new synaptic connections should be made; we also have to get rid of the old ones. We must break our pattern of habits. This requires a strong, almost 24/7 focus on changing our behavior. The chance that we fall back into old behavior is pretty huge in the early stages of a change (I think that’s the main reason why quitting smoking is so difficult, the physical addiction to nicotine is much easier to tackle than the deeply ingrained habits). That is also why we say that we need discipline to change.

The fourth and final reason I want to discuss for now is in fact the least restrictive, but it adds to our aversion to change. To change we need new skills. They need to be developed, trained and ingrained. We know that acquiring new skills is a time- and attention consuming process. A process that also is associated with the failure. After all, if we could master a new skill at once, we had that skill already. No, we know that, just as in learning how to ride a bike, in acquiring new skills, we will make mistakes and hurt ourselves (or others). Generally, that is not considered to be a pleasant prospect. That is why we say that we need perseverance to change.

Four reasons that I’ve encountered many times during my work that support my claim that personal or individual change is very difficult. Far from complete of course to duly explain all our restraints and difficulties to change (let alone organizational change), but I think these four are should always be considered when guiding people through a process of change. Change is, to put it popular ‘serious shit’. Perhaps that is why the cartoon got so much attention; it is very recognizable to us, this passive attitude towards change. I think that’s why so many coaching approaches emphasize the positive elements of change processes: make the process ‘nice’, talk about challenges instead of problems, appreciative approaches, celebrate even the tiniest results. That’s fine and understandable as long as the professional change agents keep in mind that change remains a serious and important issue and should be treated as such. Both the cancer and ‘the changee’ should always be aware of the struggle to change and practice compassion in the proces.